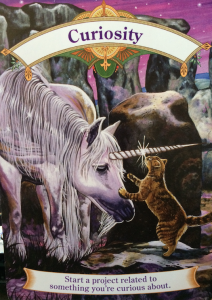 I pulled a Magical Unicorns* card today – this card was wanting to be the blog today.

When you hear curiosity, you think of cats. It’s been a couple of weeks since I’ve moved and yes I do miss Max. He was who I had my first cup of tea with each morning. He would want to sniff my tea to see if it was something he needed to have too. Each morning I would hold my cup up to him and he would sniff and turn his head away. I would remind him that he didn’t want any yesterday either. And then the next day he would do the same thing.

Watching him when there was anything new out on the porch or deck was always funny. He’d walk up to it tentatively, smell it, walk on it if that was an option. And if it was something he wanted to claim then he would lay on it and roll around.

One day I took the chimes off the hook and had them laying on the floor next to the door. I swear he thought it was a snake. He crouched down and got into stalking mode. When it didn’t do anything and it didn’t smell like anything he ignored it.

How many times in our lives do we approach things tentatively because we just don’t know what to expect. There’s nothing wrong with being tentative. In fact there may be times we could be more tentative.

Are there times when you don’t even check things out and just walk on by? Having the attitude of curiosity like a cat can be a good thing.

Looking at things from other angles than what we first see it with or asking questions – these are a great way to look at things.

We don’t have to be afraid of something just because we don’t know. If we look at it with the curiosity of a child or a cat, we can learn many things before jumping in head first.

Even the things in our life that we see every day (like Max with my cup of tea each morning). Look at things with curiosity, asking questions. We may just learn something new about ourselves as well as what it is we’re being curious about.

Angel Blessings to you,

About the Author: Sue Broome 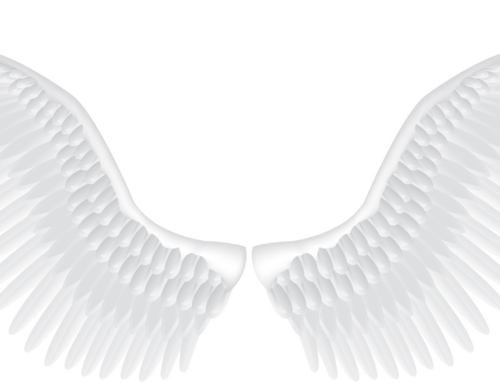